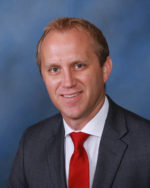 Isaac St. Lawrence is an attorney/owner at McMurtrey, Hartsock & Worth; practicing primarily in the areas of water law, civil litigation, and public agency representation. Having grown up in Iowa, he moved to Bakersfield in 2002 and started practicing law shortly thereafter. In 2004 Isaac St. Lawrence was instrumental in establishing the Young Lawyers Section of the Kern County Bar Association, and was elected as an inaugural member of its Board of Directors. In 2010 he was elected to the Kern County Bar Association’s Board of Directors and served in such capacity for over seven years. In 2016 he was elected, and served as, President of the Kern County Bar Association. In addition to his service in the local legal community, Mr. St. Lawrence enjoys playing soccer, golfing, and traveling. He and his wife Crystal have two beautiful little girls.

Interested in advertising opportunities? The Res Ipsa Loquitur is a full color monthly magazine distributed to law professionals and the legal community of Kern and surrounding counties with an estimated readership of around 2000.